This year, the GOP has decided not to let anyone who exhibits even a smidgen of intelligence or honesty run. It is the race to the least vile and abhorrent. Amongst all the clowns, Gingrich and Perry take the cake. Huntsman has a very lackluster candidacy and seems like he should belong in the Democratic party, and Santorum is a hypocritical and loony Christian fanatic. I ultimately think that it will come down to Paul, who is suddenly being touted as some sort of hero and Romney, who will say anything to win. I will be outlining and comparing these two in this article.

Campaign stresses: Mitt is the exact OPPOSITE of Obama, in every which way. Also he should be elected because he has been married for 40 years. Super “moral”. And he has had experience, at Bain Capital, at creating disgusting amount of wealth for himself hundreds of jobs by dissolving other businesses. 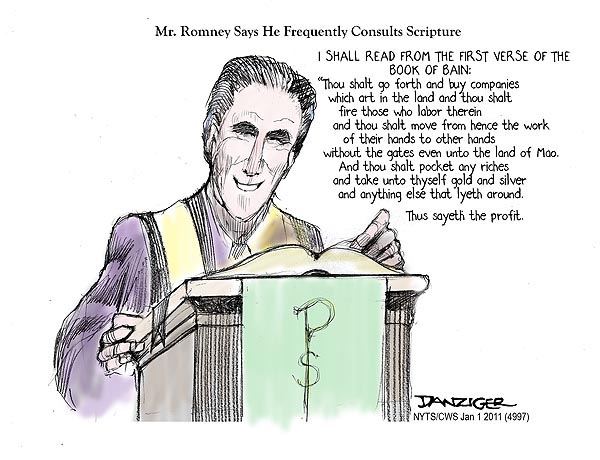 He is desperate to win. He is overloading us with his silly YouTube and Hulu ads about how he should be president because he has been married for 40 years. He will say and do anything and everything to be president. He has changed many of his policies and beliefs, from universal healthcare to abortion, in order to appeal to conservatives, rich conservatives, to be sure. His presidency will only lead to increased deficit, increased American hegemony, increase of power to the already powerful by taking from the poor, and heightening of the global social and economic crises. Overuse of nonsensical nationalistic phrases like “I will never apologize for America”, “beacon of freedom”, “one nation under god” and “freedom and opportunity” make his intentions seem highly suspect; at least for the logical. His main tactic right now is bashing Obama. While I am no fan of Obama’s tenure as president, 2012 is about picking the lesser evil. Luckily, Obama does come across considerably more personable, intelligent and genuine.

By this, he means minimal government interference in the lives of individuals. And corporations. Laws like the Sarbanes-Oxley and Dodd-Frank should not be imposed on corporations. The REVOLUTION, therefore, is to give corporations the LIBERTY to do whatever the hell they want. This is very REVOLUTIONARY, because currently companies are subjected to a lot of… Oh wait.

Adam Smith lived in the 18th century; he now lives amongst us in the 21st century through Ron Paul.  His recent popularity (especially amongst the youth) can be attributed to his seemingly fair and constant message about liberty. He believes that the free market embodies liberty, and treats the two as synonyms. It is apparently very just and democratic. This belief is used as a foundation by Paul to make decisions about everything. The natural enemy of the free market aka liberty is government (makes you question why he is running for a federal position). The government’s only job, according to Paul, should be to uphold the free market.

If history and current affairs have taught us anything, it is that capitalism and the “free-market” are fundamentally flawed. From household products to computers to energy, there are several examples of oligopolies. Ron Paul would attribute this to the supposed government intervention thus far. However, the banks and Wall Street companies that got the US into the current recession did so as a result of a lack of government intervention. The same goes for Enron. As for anger towards large businesses (specifically addressing OWS), Paul said that “we should avoid blaming businessmen who have gained wealth honestly”, but it is alright to be mad at the wealthy who became wealthy through government bailouts. Is he that naïve? The bailouts were given to the ones who were already wealthy and deceitful in the first place! He has no idea (or does not want to admit) what OWS is about – yes, people are frustrated, but they are not simply mad that Wall Street companies got bailouts (which is what he refers to). They are protesting against the economic system that is in place today, which has led to losses of jobs, benefits, and so on while 1% of the population owns over 40% of the nation’s wealth.

What Ron Paul does not understand is that many large businesses have an interest in keeping around government, even if they have to pay a taxes here and there or put up with some regulations. Who else would protect patents, trademarks, property and so on? How would companies like Lockheed Martin, DynCorp International, Washington Group International, Bechtel, Aegis Defence Services, Perini, Chevron, ExxonMobil, Parsons and hundreds of others make record profits without a large government that can wage war? So long as you have the capitalism that Ron Paul believes is just and fair, there will be an incentive to have a fairly strong government. You don’t have to look further than the Obama administration. For all of Obama’s sympathy for the OWS protesters, he has demonstrated and continues to demonstrate plenty of dedication for Wall Street and capitalism. What Ron Paul does not understand is that in a capitalist system, the government is representative of the powerful businessmen, NOT of the majority. If it was the other way, the unemployment and underemployment rates would not be so high. Mitt Romney gets this. That’s why he spends all his time brown nosing the right people.

Also, his campaign slogan is “revolution”. Is he kidding? Does he understand what a revolution is? Revolution: “A forcible overthrow of a government or social order for a new system”. In which world have revolutions occurred by electing a new president through the same system you want to overthrow?! Is making businesses the boss really a new system? I’m not sure if he is just delusional with his isolationist Tea Party-esque ideas or if this is just an easy way to get into office. Many people support him for his anti-war rhetoric, without really studying and understanding the crap he is spewing. While I am all for ending America’s hegemon and stopping wars, I highly doubt Ron Paul, if elected, with his love for capitalism and the free market would be able to do so. In fact, the leeway he would give companies to indulge in further heinous exploitation will lead to disaster.

The table below makes brief notes comparing the domestic, foreign and social policies of Ron Paul and Mitt Romney (according to analysis of their plans or what they have openly said). While I am disgusted by the notion that people vote for candidates due to their hateful and foolish “moral” beliefs, it is very clear that a candidate cannot even hope to win an election in this country without portraying themselves as being “true” to their Christian roots. Therefore, the moral beliefs of Romney and Paul are just as important as their views on most domestic and foreign issues (!)